Lacanau is one of the closest beaches to Bordeaux and there is a dedicated cycle path that goes all the way there. Signs from Bordeaux and people often tell you that it is 60km but if you start from the centre of town and take into account leaving the city centre it is a lot closer to 70km. There is the possibility to leave the cycle path at Sainte-Hélène and to rejoin it at Lacanau town, in order to cut down the distance but this is at the expense of having to cycle alongside cars. The route is completely flat all the way and exceptionally well paved making it suitable for any bike. There are long sections where you are distanced from any road making it a relaxing cycle with virtually no road noise. The beach that awaits at Lacanau makes this a trip definitely worth doing. If you wish to extend your trip, further cycle paths that run parallel to the beach lead north towards Le Point de Graves and south toward Cap Ferret and the Bassin d’Arcachon. Personally I’ve cycled this route many times, the most recent I will describe below. On this occasion I went with two friends, we cycled down on a Saturday morning, wild camped that evening then cycled back on the Sunday evening. It is worth mentioning that there is a bus back to Bordeaux that will allow you to put your bikes in the luggage compartment if there is space. Be warned this bus does get very busy during the peak summer months. 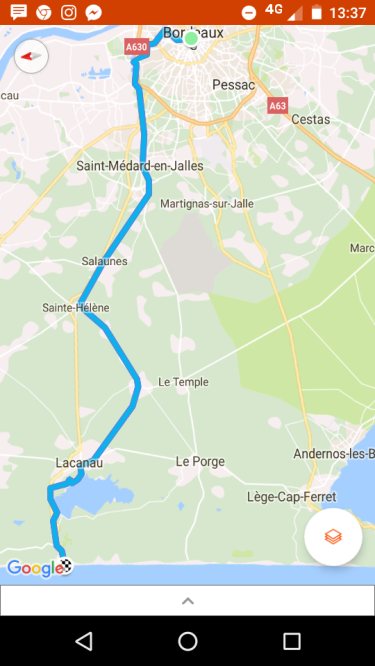 Depending on where exactly in Bordeaux you are starting from will naturally affect the first part of your trip. The cycle that you’ll need to join starts from the lake Bordeaux Lac. How you get there is up to you. We cycled long the river, up past Bassins à Flot and crossed the boulevard near the submarine base. For anybody unfamiliar with Bordeaux getting to the lake might be slightly tricky so it is worth planning ahead, the easiest and most direct route is the Avenue Emile Counord followed by the Allée de Boutaut. Once at the lake you follow the cycle path around the lake going left and there are signs that confirm you are going the right way.

After leaving the lakeside the cycle path runs alongside the A630 motorway so there is a lot of engine noise and the sights are of mostly industrial nature. After getting as far as Eysines things begin to get more picturesque. Between the lake and Saint-Médard-en-Jalles the cycle path is intersected many times by roads so it is necessary to slow down and potentially stop at many points. The point being that this route is for a leisurely cycle trip and that if you want to be hitting a 40km average speed it might be better to take the road route. 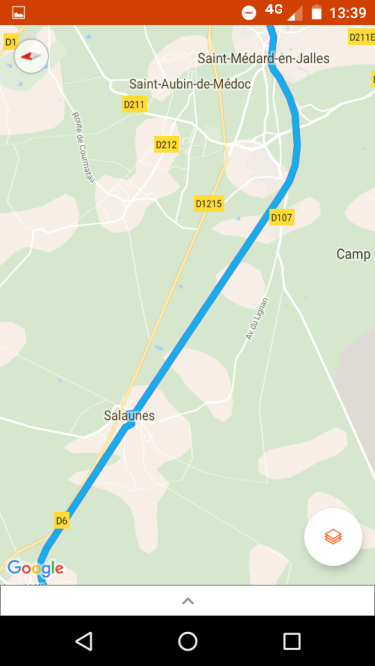 Leaving Saint-Médard-en-Jalles there are a few more road crossings where slowing down is necessary but then the route straightens out and the first straight stretch takes us to Salaunes. It is a very small village but there is a friendly little village shop where we stopped for lunch. We chose to stop at Salaunes because it is about half way but Sainte-Hélène, the next village the cycle path goes to, is only 6km further and slightly larger.

Throughout this 25km stretch the cycle path is unmercifully straight. Track going as far as the eye can see with no turn. Dead straight and dead flat. It can drive you slightly crazy. Also the scenery does not vary much. Tall trees and ferns. Arriving in Lacanau town feels great I promise. A lot of the towns along this coast are actually two towns: the town part and the ocean part. The town has schools big supermarkets, post offices, banks etc with the ocean part being more seasonal with restaurants, ice cream parlours and bars. We did not turn into the town but continued to the lake.

Arriving at Lacanau lake the first thing you’ll see is a little marina and a restaurant fittingly named La Bicyclette Jaune (The yellow bicycle). We continued a little bit further to the Promenade de Pech Lèbre where there is access to one of the lake’s sandy beaches as well as public toilets and a tap to fill up water bottles. It was a hot day so we decided to take a swim. The water is shallow for a long time so submerging yourself isn’t so straightforward but the water is clear, very inviting and relaxing. After chilling out here for a while we decided we’d better finish what we started although we were tempted to stay. The cycle path continues and skirts around the lake until once again joining it at Le Moutchic where there is a sort of little beachside village with campsites, a hotel, restaurants, and nautical activities on offer including a splash park. 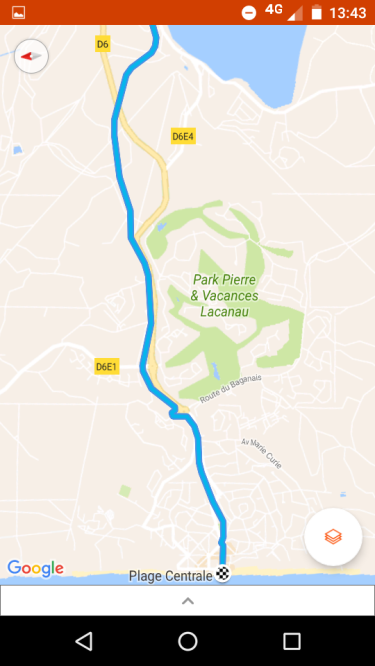 After leaving the lake behind the cycle path winds its way past various campsites and holiday parks until rolling ever so slightly downhill towards the sea. The arrival is marked by passing through a couple of concrete tunnels. Just before getting into the town there is a little wood on a hill to the right of the bike track where we found a sweet little spot to put our tents. Then all that was left to do was to go swimming, enjoy the sunset and drink some beers. The way back is much the same but in reverse, however after a few beers the night before it is not as easy! 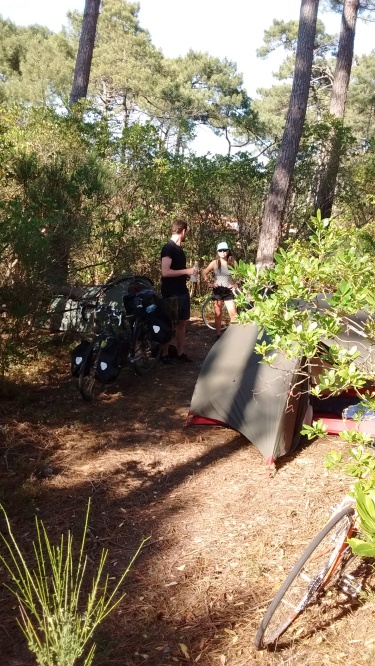 On a final note there are a couple of highly recommended establishments in Lacanau Ocean that are tucked away a bit and which you might miss if you don’t know to look out for them. The first is Burinam Thaï Food (1 rue du lieutenant Princeteau Lacanau-Océan, France) where you can eat sitting cross legged on pillows and choose from range of absolutely delicious Thai dishes that come at a reasonable price. The second is the Brûlerie de l’Océan (3 Avenue Europe Lacanau-Océan, France) where they serve quality coffee and in the mornings there is a great atmosphere with locals and tourists alike all squeezing into the the quirkily decorated little establishment for their morning espresso.